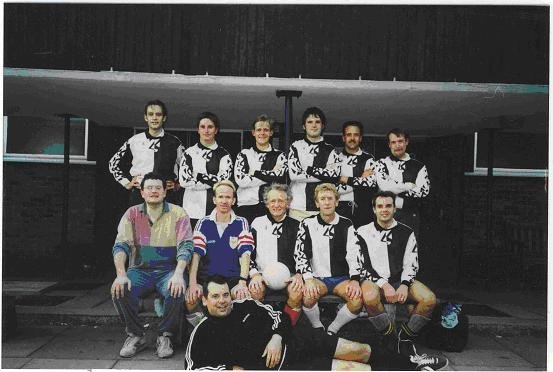 5 a- side was played at lunch in a sixth form/staff league, as well as after school on Fridays

There was an 11 a-side staff football team too that played other schools and the Year 12 & Year 13 teams. We used to play Year 11 at the end of the year only if they behaved themselves over the year. It was a good carrot to dangle in front of any meatheads that you taught that were in the Year 11 team – “behave yourself, or you won’t play in the Staff game”. The staff team had a bit of a reputation for being a bit ‘rough house’ and had difficulties at times in retaining fixtures against other staff teams in the Borough after some ding dongs with the opposition.

The team did about three weekend tours (in the school minibus) every year to play other schools around the country that we had contacts with – Bolton School for Boys/St Bedes Grammar Bradford was the big one. The nightclubs in both towns have to be seen to be believed. The team even had its own kit sponsored by Snickers. These shirts were supplied by the chocolate bar company after the school sold 50,000 units from its vending machines – the Healthy Schools programme was still to come!

The day before one tour away the bloke who normally played in nets on tour injured his hand. The only last minute replacement we could think of was the lad who played in goal for the sixth form team. He was in my Year 13 tutor group, so after an invite in Friday morning registration and the “what goes on tour…..” pledge he turned up next day with a note from his mum and was on the bus. He is in his 30’s now and still claims that was the best weekend of his life!

Another great sporting event was the renowned crazy golf tournament on the field which was organised by the PE department. You had to chip over benches, hack out of the long jump pit and lob the ball over hockey goals around an improvised course. Mr Old School himself, Matt Morse – a teacher that called girls by their Christian names and boys by their surnames, used to carry a 7 iron around along with a plastic carrier bag of 9 bottles of Beefeater G&T mixers. He would tee off and have a scoop on each hole. This was a man who had a set of optics bolted to his upright piano in his music practice room.  He would regularly spike his tea with a shot of the good stuff from one of the bottles fixed in front of him whilst tinkling away on the piano as he accompanied a scratchy Year 7 violinist. A legend.

Form trips were all the rage then. I took some of my tutees ice skating, bowling and sailing, even down to Loftus Road to watch the football. I always had a form Christmas meal out when I had a sixth form tutor group. They were often more fun than the departmental meals out. Green forms had only just started to come in then and risk assessments were unheard of. One Year 13 tutor group night out bowling ended in Zenith’s nightclub in Park Royal and I only had two kids in registration the next day!

This stuff used to be banned. One reason in particular was that the organic solvent used to thin down the correction fluid was abused by kids. The situation got quite bad for a while where students would put a few drops of the solvent on their blazer sleeve and sit and sniff it during assemblies. It became the latest craze. One could argue that the assemblies were so bad that the kids got driven to solvent abuse in order to get through them. It is ironic that these days we bang on at kids to wear their blazers in assemblies, whilst then the students were told not to wear them for fear that they would be “on the sniff”.